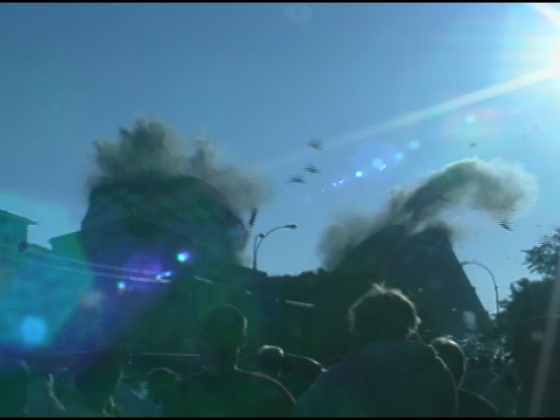 The Maspeth Holders, two enormous natural gas storage containers in Queens were going to be blown up early one Sunday morning because they were obsolete.  Curious, I went out to watch and brought a camera along.  After speaking to some of the local residents and experiencing a large party atmosphere on the morning of the destruction, I found myself moved and saddened by the passing of these tanks, the largest structures in Brooklyn or Queens.  The violent and near instantaneous destruction brought up feelings of loss that I’d been holding onto since the passing of my good friend and colleague Bill Nisselson of Sound One Corporation a week earlier and to whom this film is dedicated.   The film unexpectedly evolved into a haunting parallel to the destruction of the World Trade Center just two months later.

A domestic tableau in which the artist’s wife disinterestedly reads a fashion magazine in bed while the artist passes left to right and right to left across the picture window behind.  He increases his speed progressively with each pass until running full speed and then he slows with each successive pass until, moving imperceptibly, he passes one last time before the image fades to black.

This single take video documents a lone surfer as he unsuccessfully braves the heavy surf of a hurricane swell on the eastern tip of Long Island NY.  The voyeuristic camera follows him as he exits the surf and then the beach as the video evolves into an unexpected socio-political commentary.

My Left Arm explores the psychological state of the artist and the city in the days following the 9/11 attack upon the World Trade Center after a minor but bloody injury sends him to the emergency room for stitches.  Foregoing any actual shots of ground zero MLA instead focuses upon surreal and poetic imagery that obliquely references the devastation just a few blocks away juxtaposed against a close scrutiny of the bandaged left arm of the artist.